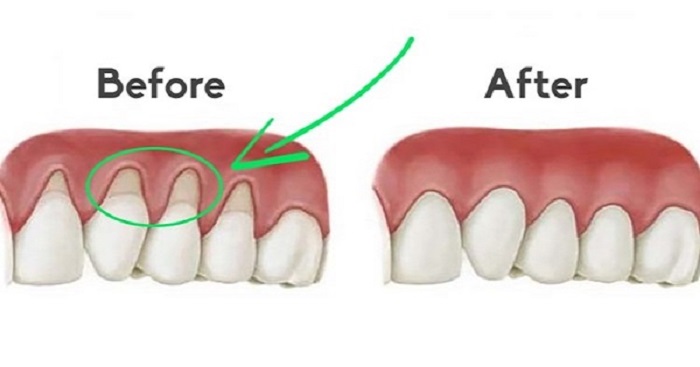 Receding gums is one of the most common oral problems nowadays. No matter how simple the problem might seem, it may cause a lot of pain. The problem is caused by inflammation in the gums which recede over time, making the gaps between the gums and teeth bigger and exposing them to bacteria which can destroy your teeth.

Receding gums are quite a common problem which develops slowly and without symptoms in the beginning. The most common symptom is your teeth looking visibly bigger as well as toothache and sensitivity to hot and cold. The earlier you spot the signs of the condition, the better.

In general, receding gums are caused by genetics, bacterial infections or just brushing your teeth too hard. Putting too much pressure on your teeth may damage the protective coating of your teeth and cause your gums to draw back. This is why dentists recommend brushing lightly and with a soft or medium brush.

If the problem is caused by bacterial infections, it can be harder to fix. Bacteria may cause periodontal disease which damages the bone that supports your gums and teeth and may lead to tooth decay and loss.

Sometimes, receding gums are caused by a simple problem like a piercing on the lips and tongue which are constantly rubbing against the gums. Hormonal imbalance may also cause receding gums as the gums are more fragile during this time. Smoking is another cause of receding gums and a nasty habit you should stop as soon as you can.

Although rare, bruxism (teeth grinding) may also cause receding gums. You should stop grinding your teeth in order to keep your gums intact. Brushing and flossing every day is generally recommended as one of the simplest ways of prevention of receding gums.

As soon as you notice that your gums are receding, you should visit your dentist. He or she will then order tooth scaling which will remove plaque and tartar from the gum line – if the problem is severe, you may require oral surgery.

However, if the problem is mild, you can treat it at home using various natural remedies. There are many herbs, plants and oils that can soothe your gums and reduce the inflammation within, effectively drawing them back in place and preventing tooth loss. Here are the best natural remedies for receding gums:

Both sesame and coconut oil have powerful antibacterial and anti-inflammatory properties and can be used to destroy bacteria in the mouth and remove toxins and chemicals from it. Both will coat your teeth nicely and protect them from further bacterial attack. Just swish a bit of sesame or coconut oil in your mouth for 15 minutes, then spit out and don’t rinse with water.

Green tea contains powerful antioxidants and similar compounds that can fight free radicals in the body and prevent numerous ailments. This tea contains catechins as well, antioxidants that can prevent periodontal diseases and tighten the bond between gums and teeth. The tea will reduce inflammation in your gums as well and prevent further recession.

Aloe Vera gel has been used against various oral and skin problems for a long time. It can repair cell structure and treat receding gums effectively while also reducing the inflammation in your gums.

Clove oil is a great numbing agent that can soothe the pain in your teeth and gums and halitosis as well. Rub a few drops of the oil on your gums, but make sure to consult your doctor if you’re on blood thinners. On the other hand, eucalyptus oil is a powerful antibacterial remedy that should be diluted before being used on the gums. Myrrh oil massaged on the gums can help as well. Just mix it with some water and apply it on your sore gums to soothe the inflammation.

Lemon oil has antibacterial and antiseptic properties that can heal your gums and relive the inflammation within. The oil can relieve halitosis as well and is great for your oral health. Lemon oil can promote gum regeneration and refresh your breath as well.

Here’s how to make your own lemon oil which can help you for receding gums:

Juice the lemon in a jar, then pour the olive oil in and mix well. Close the jar next and store it in a dark spot for a couple of weeks. Shake the jar occasionally every day to make the ingredients infuse. After 3 weeks, the oil should be ready for use. To use it, rub a bit on your gums using your finger for a few minutes. Repeat the process a few times per week to heal your receding gums and improve your oral health.